In 1926 George Jeffrey’s held tent meetings in Moordown, many were saved and healed at these meetings. William Hunt, a severely crippled man from Wimborne went to these meetings with his wife.  They were both saved on the second night. On the third night William Hunt was completely healed and left his sticks at the tent. 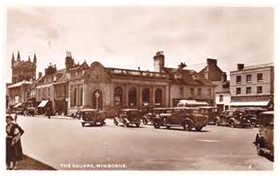 The Hunts explored the streets of Wimborne looking for people to  invite to the meetings in Moordown; they even hired a coach.

The founder members of Wimborne Elim were saved and introduced to the teaching of the Baptism in the Holy Spirit.  They saw the Spirit in action! and their numbers grew.  They were so eager to fellowship together that they stayed and had lunch together and hardly went home on a Sunday. Pastor Dyke led the meetings, a man with a heart for young people.  He taught and trained them and took them out to conduct services in other districts.  The Crusader Group had around fifty young people.

A new temporary building was erected on the plot of ground where our current church stands.

This building was opened between 1932 and 1935.  During the years of the war some of the men were called up for service and numbers obviously dwindled at this time.  Pastor Roy Knox found it necessary to take part time work to support his family after the war, this upset some members of the congregation and they left the fellowship –  these were founder members. This had a negative effect on the fellowship and there was talk of closing Wimborne Elim down.  Praise God for a handful of faithful Christians who believed God would do great things again in their fellowship and fought to keep it going.

In 1956 Pastor Bristow took over the combined pastorate of Christchurch and Wimborne and the Fellowship started to grow again; families joined the fellowship and they willingly put their hands to the plough. They saw increase again.

The current church building was erected in 1979.  Wimborne Elim has seen a number of faithful members and Pastors come and go over the years who have contributed wonderfully to the development of the church.  We still enjoy the company of members who have been a part of Wimborne’s story for many years.  Come and meet them!